Markov processes with discrete time and arbitrary state spaces are important models in probability theory. They model the infinite steps of non-terminating programs with (not just discrete) probabilistic choice and form the basis for further probabilistic models. Their transition behavior is described by Markov kernels, i.e.~measurable functions from a state to a distribution of states. Markov kernels can be composed in a monadic way from distributions (normal, exponential, Bernoulli, etc.), other Markov kernels, and even other Markov processes. 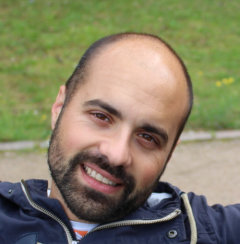